What is Academic Freedom?

"Academic freedom should make it possible for researchers to systematically and fundamentally explore what they do not know. They should be able and allowed to question what they do know, to ask seemingly unanswerable questions, and to give questionable answers." During the Opening of the Academic Year 2021/22, Fellow Lukas Verburgt shared his thoughts on academic freedom.

Let me start this short talk about academic freedom by saying that I don’t  know exactly what academic freedom means. Or, more precisely, to paraphrase Augustine: I know what it is when I am not asked about it; but when asked, I no longer do. Rather than being disappointing and simply ending my talk here, let me add that I believe it’s very important not to know exactly what academic freedom is; it’s at least as important as it is to defend it. For only when we do not pretend to know what it is, can we begin to genuinely ask what it is and why it matters so much to us. Otherwise, any answer would merely repeat what’s already presupposed in the question. It is only by daring to be ignorant that we can hope to become really knowledgeable.

It is only by daring to be ignorant that we can hope to become really knowledgeable.

This brings me to my highly tentative central point: I think that the essence of academic freedom – if it has one – is not that of being free from restrictions to know this or that but that of being free not to know something. To use age-old language, it has less to do with negative than with positive liberty, less with freedom from than with freedom to. As such, academic freedom should perhaps be thought of not so much – or at least not only – as a right but as a duty that we have.

Having the duty to be ignorant, to not know something, to engage with the unknown. What could this mean? It does not mean, of course, that biased, selective ignorance should be protected under the guise of academic freedom. Rather, it means that, insofar as knowledge always begins and ends in ignorance – and insofar as every piece of knowledge comes with a bigger piece of ignorance – academic freedom should make it possible for researchers to systematically and fundamentally explore what they do not know. This means, among many other things, that they should be able and allowed to question what they do know, to ask seemingly unanswerable questions, and to give questionable answers. That is, to make good mistakes – which is actually very hard – and to fail, try again, and fail better – which is perhaps even harder.

I think of this as a duty that any researcher has. But, in saying this, I also automatically think of the institutional conditions that need to be in place for the researcher to be able to act upon this duty, to be allowed to be someone who acts upon it. Our current academic world doesn’t like mistakes. It doesn’t like failure. It likes success. There is nothing wrong with success. But there is something wrong with a notion of success that excludes the possibility of failure. Just like there is something wrong with a view of knowledge that denies the ignorance by which it is always, unavoidably accompanied. All the same, there’s something amiss when answers start to matter more than questions, and when only those questions are allowed to be asked which are already held to be answerable.

That’s the beautiful paradox of knowledge: the more we know, the more we don’t know or, that is, the better we know what we don’t know. And it is this paradox that – paraphrasing Harari – stands at the heart of the human quest for knowledge: only once we admit that we do not know the answers to our most important questions can we start our attempt to obtain the knowledge needed to answer them. This holds in the exact sciences as much as it does in the social sciences and humanities. 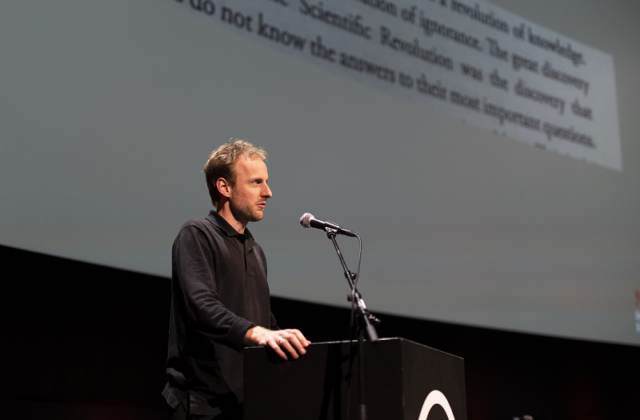 Lukas at the opening event

What makes NIAS unique is that it takes this seriously; that it takes seriously the fact that, in order to push beyond the present limits of our knowledge, it is crucial to be given the time and resources to explore our own ignorance: to find out what we don’t know, why we don’t know it, and how we might get to know it. This, then, is what I hope to encounter and achieve during my time at NIAS: that after 10 months of intellectual exchange, I not only know more but also know less. For that would mean, for me personally at least, that I have probed the limits of my own knowledge and that I have fulfilled my duty of being truly academically free.