An Impression Into the 2022 NIAS Symposium Contested Objects

This NIAS Symposium was a first. Made up of two keynotes, four parallel workshops, and a closing spoken word session, this mini-conference departed from the previous single-lecture format, to ‘give the floor to many colleagues’, as NIAS Director Jan Willem Duyvendak clarified in his opening remarks. Moderated by curator Rita Ouédraogo, the symposium’s professed goal was to disentangle the racial and colonial dimensions of material culture. Confederate memorials in the USA, Fascist train station architecture in Italy, or colonial fortifications in the Philippines are but a few examples of what Oxford Archeologist Dan Hicks aptly denotes as ‘toxic monumentality.’ This points to how significations of these objects change over time.

To inquire how, when and why objects become contested, the NIAS Symposium is broadly situated within ‘material turn’ in the social sciences and humanities, which – as Jan Willem Duyvendak remarked – pays attention to the ‘meaningfulness of material culture.’ As opposed to the discourse-heavy conceptualizations of Laclau, or Foucault, the material turn encourages us to not reduce materiality to the ‘tacit background’ against which the social is set, but rather to shed light on the agency of materiality in forming the social.

To make sense of the workings of these issues, the first keynote by Britta Schilling encourages us to consider contested objects beyond the usual suspects (monuments, statues, and memorials), by taking us ‘behind closed doors’ into domestic spaces of ancestors who ‘were involved in’ colonial projects. How do objects such as wooden chests from Zanzibar, or silk robes looted from China’s imperial palace, evoke the colonial past? What do they mean to those who hold on to them? And what does this tell us about colonial nostalgia? Drawing from the work of art historian Alois Riegl, Britta Schilling suggests what these objects have in common is that they are ‘unintentional monuments’, which take on a life of their own: re-signified by those who possess them, as these objects move through time and space.

The second keynote by Rahul Rao begins with a statue of Mahatma Gandhi in Amsterdam which has been ‘defaced’ or ‘reinscribed’ – depending on how you are politically and intersectionally positioned – with the word ‘Racist’ and the numbers ‘1312’ (meaning: ACAB, ‘All Cops Are Bastards’). Occurring in the midst of the Black Lives Matter protests in various places around the world, what has happened to the statue in Amsterdam and elsewhere at the time is evocative of the racist, casteist, and imperialist qualities of Gandhi’s project, and the paradoxes of his legacy. Building on evidence from Ghana in particular, Rahul Rao connects his observations with the emancipatory politics of Dalit-Black solidarities, but also the proliferation of the racist-exclusionary practices of the Hindu Right. 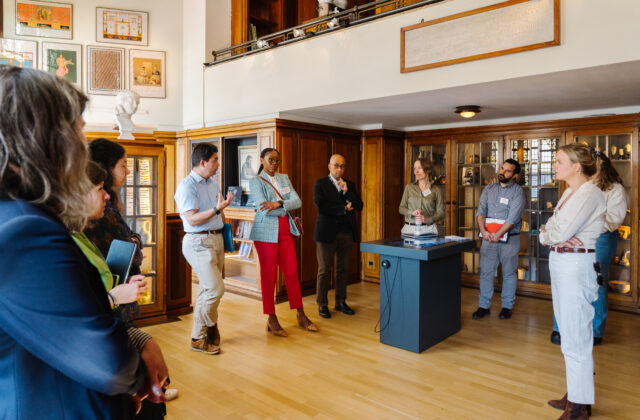 Following the keynotes, four parallel workshops scrutinized various facets of contested objects in more detail, ranging from food, to colonial architecture, to ‘Fortress Europe.’ Regarding the latter, the workshop by Maria Boletsi, Florian Lippert, and Janna Houwen elaborated on defamiliarizing and ‘weirding’ the seeming normality of the (material) realities of Europe’s migration regime: how Fortress Europe is built and defended vis-à-vis fences, drones, data, or surveillance cameras, and how it is represented in visual culture.

Building on films that dislocate those hegemonic constructions of migrants and refugees that reduce them to either passive victims or active threats, this workshop attended to the dehumanizing, but also emancipatory capacities of cameras and camera work.

Alas, the Symposium came to a worthy ending through Ricardo Domeneck’s thoughtful spoken word performance. Ricardo’s eloquent intervention builds on the first findings of the “DNA do Brasil” study, where ongoing genome sequencing finds that 70 percent of the sample can be attributed to mothers of African and indigenous descend, but 75 percent of the fathers are of European descent. Ricardo Domeneck thus disentangles the evidence of rape of enslaved black and indigenous women during the Portuguese colonization of Brazil. But by ‘reclaiming vanished words and conquered dialects’, as NIAS communications officer Kahliya Ronde carefully observes, Ricardo Domeneck also points to the fragilities of colonial narrative, as well as the emancipatory potentialities of language and subjectivity.