On 12 October 2017, reminiscence filled the rooms of NIAS during the Alumni Day. The event welcomed former and current fellows who participated in an afternoon lunch, followed by a guided tour of the building, a ‘speed-dating’ section, and a lecture by Professor Theo Mulder.

The shared lunch was a nice opportunity for the fellows to familiarize themselves with other scholars. Usually in this room approximately 30 fellows enjoy a shared lunch, however, this time around 60 persons joined in for the event. Extra-large tables had to be placed so the current and former fellows could have the opportunity to talk to each other and exchange experiences and ideas.

After the meal, former fellows received a guided tour of the NIAS building in Amsterdam. Previously, NIAS was located in Wassenaar, which triggered the former fellow’s curiosity in the event. Seeing the new premises, made some former fellows nostalgic about the Wassenaar past, while others were pleasantly surprised.

The speed-dating consisted of three questions. Each fellow had several minutes to discuss the assigned topic and move to the chair (and person) on their right for the next inquiry. These questions focused on their vision of NIAS, their views on the importance of the institute and the ways in which NIAS could strengthen the Alumni community, leading to a lively discussion.

The presentation by Theo Mulder focused on his remarkable research on imagination. Particularly the connection between imagination and memory in our brain was explored: without imagination there is no memory and without memory there is no imagination. Both elements are intertwined, and Mulder showed empirical evidence of this by displaying experiments that he had undertaken. For instance, one of his experiments concerned a lady that could hardly walk and dance. She was asked to remember and imagine the days when she was able to dance. After weeks of training her imagination, she was able to dance without any problem. Another example given by Mulder was that of the ‘phantom’ arm, an arm that is amputated but the brain still remembers it. He explained that some people experience severe pain on their non-existent arm or hand, as some of them have the feeling of a closed hand in which the fingers pierce their palm. In order to alleviate their pain, the participants are asked to place their hand in a box that contains a mirror. The mirror reflects their hand that is perceived by the brain as the missing hand. The participants are then asked to open their hand, which results in the opening of the other hand too. Now, the brain has access to new memories of an open phantom hand triggered by the imagining of an actual hand, alleviating the participant’s pain.

After a rich exchange of ideas, experiences, and observations, the Alumni Day concluded with the tour of the fellows’ residencies. The Alumni Day was not an imagined event, but, hopefully, a nice memory for the NIAS fellows. 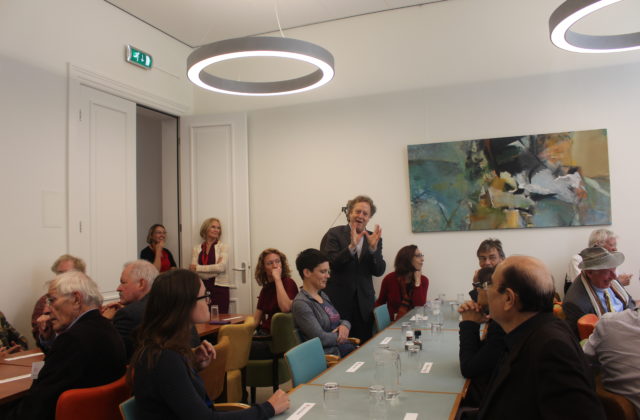 Report and photos by Sofia Murell.