An Interview with Fellow Frederik Swennen

At NIAS Frederik Swennen works on a project that analyses the edges of family law: “Our law needs modulation, to cater for all the different ways in which people choose to live together.”

In his research, Swennen always examines the borderlines of family law, in which he focuses on what is just outside it. For instance, when he was appointed as a professor in 2002, Belgian parliament was discussing the opening of marriage for same-sex couples. Now, it is polyamorous marriages that are debated.

Frederik Swennen has just returned to his office after holding a NIAS seminar in which he introduced his research to the other fellows. He currently examines legal recognition and regulation (if any) of alternative horizontal relationships. During his seminar, he explained that his project reconsiders the conjugal couple by analysing it through feminist theory, in addition to qualitative research that he conducted. Swennen’s empirical data reveal that there are individuals who live as queer families (e.g. platonic unions, more than two partners, polyamorous unions, etc.) and who claim symbolic recognition of law as a family. One of the problems, he emphasised, was the difficulty to find these queer families, as they are not formally registered in the civil registry. Thanks to social media and snowballing, Swennen was able to find these families and interview them.

Having examined the results, Swennen proposes a ‘modular system’ in order to integrate queer families into family law. For Swennen, today’s family law favours the domestic, dyadic and sexual family union, excluding many others. This leads to queer families being pushed further away in the shadow of the law. Law should recognise and protect the various assemblages that exist nowadays. In his words, “law needs modulation.”

But what exactly is a ‘modular system’?  This system – metaphorically – can be seen as the menu in the Indonesian cuisine, where a staple – such as rice – as complemented – or not – with standard offerings such as vegetables, fish or meat, and only in a final layer can be individually flavoured, for example with peanut or soy sauce or coconut milk. These various dishes would be the layers of the system. Thus, the modular system is a selection of legal layers that individuals in a relationship can select to apply or not for each individual in their union. Swennen explains that “the problem now with family law is that it comes in a predefined package deal that involves different layers of solidarity such as financial interdependence between spouses, financial aid, inheritance rights, etc., and is only offered to a predefined assemblage of two, cohabiting persons in a sexual relationship.” Swennen illustrates this with an example,

I had an interview with a polyamorous constellation: one woman with her two male partners and one other female partner of one her partners with whom she herself had no relationship (a metamour). In terms of financial solidarity the interviewee considered one account for the whole, but in terms of medical decision making, for example, she wanted only her two husbands to take a decision and not the metamour. So, whereas now all the rights and obligations would apply to all of them, she wanted to opt some modules only for the husbands.

Thus, by applying a modular system, the different members of the constellations – not only two spouses but three, four or five – could change and opt to choose which layer(s) would apply for each individual(s). 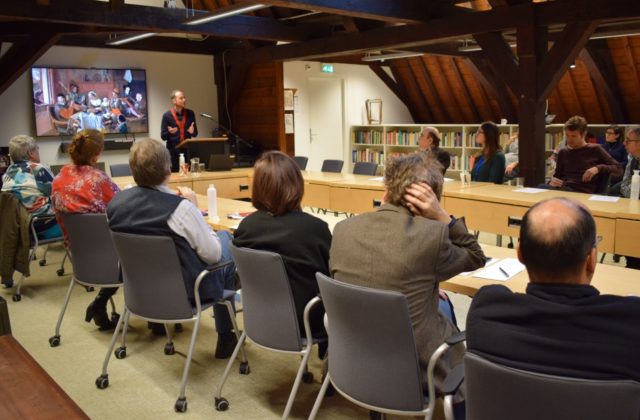 At NIAS, scholars from various disciplines have numerous opportunities to comment on each other’s work and be exposed to other fields. For Swennen, this setting was very helpful because continental legal research is usually mono-disciplinary. As Swennen uses an interdisciplinary approach by applying empirical research methods and social science theory – which is rare in continental legal research – he received useful advice from NIAS colleagues. Swennen pointed out that when he was coding and analysing the interviews, “the input of some fellows was very helpful, as to methods and as to the social theoretical part. For example, Johanna commented from her experience with empirical methods, Karin from her background in political theory, and Matthew from his philosophical perspective on citizenship. They really added layers to the research.”

Swennen continues his project with great progress and concentration, as he remarked,

It’s so peaceful here [laughs]… We have the space – literately and figuratively –  and time to think about our ideas, how we want to formulate them and in which form, that is one aspect. The other aspect is that in the university settings there is a lot of jealousy. When I was appointed at the university, I read the book of Willem Frederik Hermans ‘Onder professoren’ [1975]. Willem Frederik Hermans is one of the three major writers in post-war Dutch history, he was a professor in Groningen. After he resigned, he wrote a book on this period and lots of it was taken from his experience at the university, which was based on an abundance of jealousy and competition and so on. I also experience this at my university. However, this is absent here – it is a complete contradiction. I feel we are sincerely interested in each other’s work and that we are sincerely happy when someone else has success. For instance, in my faculty, when someone would receive an ERC-grant it would be very hard for him to get congratulations from some colleagues, but here we were very happy for Elise that she obtained the grant – that is really a difference. Of course, we don’t have to compete with each other.

So what’s next? “Hard reality is what’s next,” Swennen laughs. He continues, “I had a sabbatical leave of one year and after NIAS I am returning to my home university to continue teaching and researching.” Swennen is sure that with the data that he obtained he will be able to keep on working for the next few months even with a busy daily schedule at his university. “I not only aim to develop a key piece for socio-legal scholarship in the Low Countries but to spur on the societal debate on queer intimacies. The people concerned are currently simply ignored in a fundamental aspect of their being in the social and political sphere.” 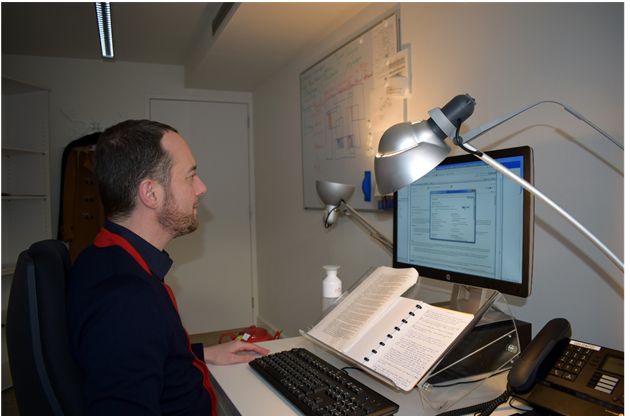 ©NIAS. Frederik Swennen working. “The pressure is much less. I am having pleasure in writing now.”