The Function of the Past: Why History Matters in Present-day Societies

On Friday April 23, a group of NIAS Fellows convened for a virtual lunch to jointly reflect on this year’s annual lecture. “An imagined past? The politics of history making” was the third lecture of a trilogy that examined the use of history, its ties to current-day inequalities and questions of revisiting the past in an inclusive manner. Five fellows were invited to share their takeaways from the event. The recurring theme? The function of the past.

While fellows based in The Netherlands enjoy their freshly delivered lunches, Sophie De Schaepdrijver takes it away by highlighting how the past is always imagined, how there is no repository of facts we can just reach back into, and how the best we can do is to tell ‘true stories’ as medievalist John Arnold puts it – hearing as closely as we can to what can practically be known, and trying to interpret the blanks. She critiques the ‘usable past’ as our best option to do so, as usable pasts reconstruct history to fit present-day needs, and in doing so disregard the question of future benefits.

After touching on how the past indeed is and always has been written based on the needs of the present, Natalya Vince questions whether we should be using the past to talk about current-day oppressive realities. She notes how continuously talking about the past might be a smokescreen to avoid addressing today’s issues, and how this creates space for window-dressing rather than implementing actual change. 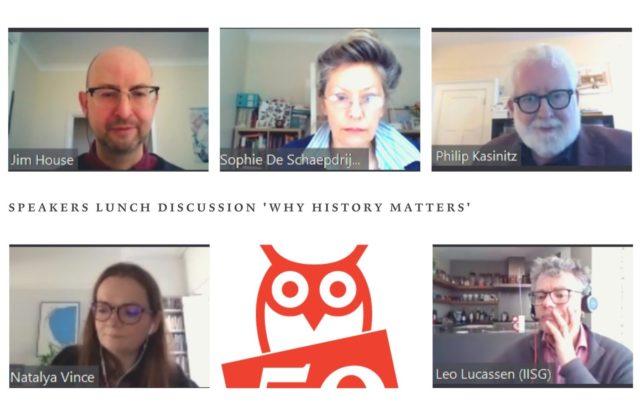 Next, Leo Lucassen offers his perspective on the public use of history and how there are multiple phenomena hindering us from having a clear picture of the past. He explains how asymmetric comparisons between moments in time distort history, and how dismissing the past and denying discomforting facts are other impediments to developing a clear idea of what the past is.

Jim House speaks on the question of scale and mentions the articulation between the local, the national, and the transnational past. How might investments in local pasts be used as a platform to change the picture at national level? Drawing on examples from his own research into the history of a colonial massacre in Paris in 1961, Jim points us to the fact that some, typically right-wing groups,  argue that critically examining the colonial past might undermine social cohesion rather than enhance it. Others in the group wonder whether we should aim for cohesion at all, instead of simply aiming to tell more true stories.

Lastly, Phil Kasinitz also uses his time to emphasise the importance of the local in engaging with history. He points out the city as a vehicle, a place where culture becomes captured in physical form, where memories get attached to physical places, and tie into national identity.

Phil’s last remarks wrap up the conversation nicely. While the lunches are being finished and fellows share thoughts in the chat, he wonders whether the notion of ‘adding’ historical narratives instead of demonising dominant ones might be the only way to come to a shared understanding of the past. What’s clear is that whether we use the past as an explanation for what is today or as a veil to hide behind in order not to address today’s reality, if we want to integrate stories that were traditionally dismissed, we might have to fundamentally change how we see and do history.