The Downsides of Equality Talk in the Welfare State 2.0

The new welfare state is said to be close to its citizens and does not dominate, but cooperate. “But this paradigm has a hard time to acknowledge the power relation that shapes the relation between state and citizens,” says Anouk de Koning, Urban Citizen Fellow in 2020. An interview about her research, the importance of connections, and the need to leave room for conflict.

You were selected as the very first Urban Citizen Fellow, for three months. What did you do during  your fellowship?

“My goal was to write up my research on Amsterdam’s Parent and Child Teams, setting out how these new teams that provide simple and accessing youth help and parenting support at the local level in Amsterdam. In recent years, we’ve seen new views of the welfare state take shape: a welfare state 2.0, which is close to its citizens, partnering up with people rather than dominating.

In this view, very much promoted by Amsterdam as well, government is near, accessible, rooted in the neighbourhood and it has a human face. In my research I try to unravel this new welfare paradigm and see how it works in practice. Not to bring it down, but to see its dilemmas and complexities.

But the fellowship developed to include much more than my own research project. At least three more projects evolved, all with the innovation officer at the democratization department that the municipality suggested I team up with, Aartie Mahesh. I helped her think through her research on so-called “neighborhood brokers” (gebiedsmakelaars), and the factors that make these connecting pins, appointed to address citizens’ issues in an integrated way, successful, or not.

Aartie found that an integrated way of working doesn’t always work. The neighborhood broker has to deliver messages to different services and in general, these services are structured in domains, not around particular problems or tasks. So that doesn’t match. However, some people in the services do think in an integrated way, and if the neighbourhood broker manages to find these, it works well.

Out of that cooperation, another follow-up research project came into being, in which a student from Leiden looks at how these brokers connect the municipality to the outside: the neighbourhood and residents. Which people do the neighborhood brokers actually reach, whose voices are heard, and whom do they prioritize? That project is in full swing now.

A third project, which is going really well, is about first-time voters in elections, participation and non-voting, in collaboration with Hogeschool Inholland. The student who conducts the ethnographic research actually went out during the curfew riots – obviously before curfew –  and talked to a wide array of youths, neighbourhood moms, social workers and youth organisations. All that rich information will result in a report to the municipality.

So I actually cooperate with the municipality way beyond the initial plan. And maybe that is also what the fellowship is about. On the one hand working on your own stuff, but on the other hand connecting to the organization, and seeing where you can team up and make your knowledge useful. That also has changed my position – I’ve been working on local welfare for ten years now, and instead of an outsider anthropologist who does not always find municipality workers who have time to talk and listen to my findings, my expertise is seen as valuable, now that I actually collaborate with them.” 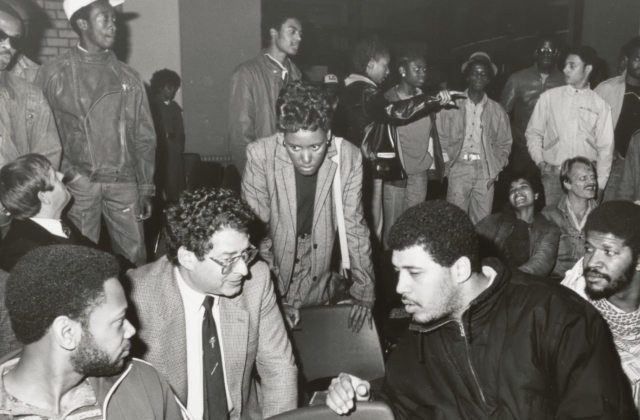 Hear me out! Citizen-state relations in Amsterdam takes place on 1 April.

You will present your findings during the upcoming public debate “Hear me out – citizen-state relations in the city”. Can you give a glimpse of what you will be talking about?

“Well, I will be talking on the idea of the new welfare state 2.0, and some of the dilemmas of that welfare model I noticed in my work with the Parent and Child Teams. One of these is that the paradigm of the new welfare state has a hard time to acknowledge the power relation that shapes the relation between professionals and families, and more abstractly, state and citizens. You might talk of “eigen kracht” (working with people with them in the lead, from their own strengths), of respecting people for what they are, of not overruling them, but that does not capture all that happens. Citizen simply are in a power relationship with the state. By misrecognizing this and hiding it from view, it becomes impossible to address.

The most prominent example in this case is colour or ethnicity. In the Parent and Child teams that I accompanied, I noticed a pushback against talking about race or ethnicity. Laudable, in many ways, but it also makes it difficult to address the whiteness of institutions, or to discuss the difficulties in relating to parents in more precarious situations or who are recent migrants. We should talk about that complexity, address the power dimension, and leave room for conflict and clashing narratives. We need that, because you do not want your good intentions of democratization and equality, actually undermining what you want to do.”

The live-streamed public talk “Hear me out – citizen-state  relations in the city” takes place on I April at 20.00. It includes discussions by Anouk de Koning, Nanke Verloo, Markha Valenta, Rutger Groot Wassink and Caroline Nevejan. Registration is free, but required.

Anouk de Koning wrote an essay about her findings as part of the fellowship. “Democratie in uitvoering” (democracy at work) can be read online here.

Anouk de Koning is associate professor at the department of Cultural Anthropology and Development Sociology at Leiden University, where she co-directs the interfaculty focus area Social Citizenship and Migration. De Koning specializes in urban anthropology and anthropology of the (welfare) state and of policy. Her current work focuses on Amsterdam’s welfare landscape, and she has previously conducted research in Egypt and Suriname.

From 2015-2020, she headed the research project Reproducing Europe: Migrant Parenting and Everyday Citizenship, funded by a ERC Starting Grant. This multi-sited anthropological study studied the negotiation of ‘everyday citizenship’ in Europe today by examining encounters between migrant parents and the state in in Paris, Milan and Amsterdam. De Koning is co-convenor of the EASA Anthropologies of the State network. In 2020, she was Urban Citizen Fellow at the NIAS.

About the Urban Citizen Fellowship