Alumna Preeti Chopra on colonialism, getting stuck, unstuck, and the bitter-sweet experience of returning to NIAS. A short dinner talk held during the annual NIAS Fellows Association Day 2019, just before the bitterkoekjes dessert was being served.

“While at NIAS, I worked on my book project The City and its Fragments: Multiple Publics & the Everyday in Bombay.  To give a brief overview: Colonial Bombay has traditionally been understood as a city shaped primarily by the state, or as a dual city with a white town and black town.  However, neither understanding is correct.  In my book, I instead try to understand Bombay in terms of its multiple fragments, key actors who shaped the city, and the shared spaces and practices, which help its diverse residents cohere.  My study centers on the period between 1854-1918, as these are considered the years “of uncontested British supremacy.”

By emphasizing the role of native communities in the construction of colonial Bombay, this book project builds on my work in A Joint Enterprise: Indian Elites and the Making of British Bombay.  In that book I argue that the public infrastructure—the joint public realm– of colonial Bombay, constructed especially since the 1850s was built jointly by the colonial rulers and wealthy native philanthropists.

My project—The City and its Fragments–foregrounds everyday life, formal and informal processes by which various groups and the colonial state constructed and remade the city.

This much was clear.  But until I came to NIAS I had also gotten a bit stuck. Having the time to think, exchanging ideas and engaging with the work of colleagues from a dazzling array of disciplines and locations helped to energize my thinking.  Thus, it was only while I was at NIAS that it became evident that The City and its Fragments does not exclude elites, but emphasizes the exercise of charity rather than philanthropy.  Furthermore, there was the bitter-sweet realization that charity and philanthropy were deeply entangled in The City and its Fragments.

Philanthropy was important in bringing people together, sometimes, a diverse array of people, in institutions such as hospitals, lunatic asylums, museums, colleges and universities.  Sweet.  It could also support public parks, such as the Victoria Gardens.  Sweet too.  It helped constitute so much of what was “The City”, the shared spaces of belonging, beyond one’s class, and community affiliations. Very sweet.  Philanthropy helped natives begin to think of themselves as Indians.  Yet, philanthropists hailed from the elite, and from a few communities.  Bitter.  Thus, the exercise of philanthropy was not a shared practice.  In contrast, the exercise of charity was a shared practice, amongst a diverse array of communities. Charity helped individual communities thrive.   This was sweet too.  Yet, charity was about exclusions, and fragmentation.  Very bitter.  Together, native charity and philanthropy built much of the infrastructure of the colonial city.

I wish I could triumphantly claim that I finished my book manuscript and learned how to speak fluent Dutch during my stay at NIAS.  But that is not the case.  My manuscript is on a more sure and stable footing.  Much to my regret, I must report that my Dutch did not advance at all.  This last year has made me realize that there is life after NIAS, even if it is not always quite as good. Carrying the idealistic part of NIAS with me: the conviction that ideas matter, helped my transition back to the “real world.”  This conviction is even more important in the neoliberal world we live in now, dominated by all kinds of measures that have little to do with learning and understanding.

Coming here today is bitter-sweet, a mix that makes for a nice dessert with its balance and complexity of flavors.  Our NIAS community of 2017/18 has scattered, fragmented, each going her or his own way, and never to return as one.  Yet, this alumni event makes me feel part of something bigger—the NIAS community, each of us coming with a different and yet shared experience of having been part of something that’s very tasty!” 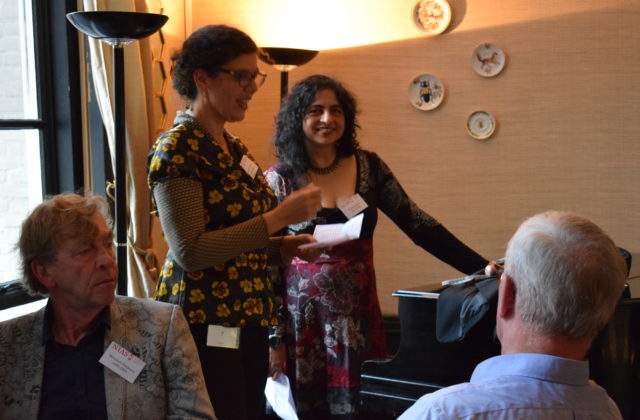