Back to the DNA of Your Ancestors

"From a DNA perspective we are all migrants", writes Leonard Rutgers in his weekly column in the Dutch daily newspaper Het Financieele Dagblad. Rutgers is at NIAS as a coordinator of the theme group "Diaspora, Migration and the Sciences." 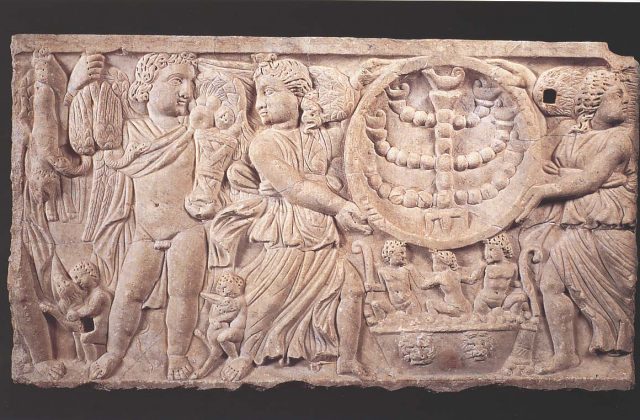 Find: Relief showing Roman Slaves, 200 AD; The Romans dragged their prisoners of war from everywhere inside and outside of the Roman Empire Site: Izmir. Currently in the Ashmolean Museum Oxford

“Currently I find myself in the enviable position of being relieved from my day-to-day academic tasks and free to think, without interruption, about the novel developments in my field.

This is possible because I hold a NIAS-Lorentz Theme-group Fellowship at the Netherlands Institute for Advanced Study. I have assembled a group of international scholars around me at NIAS with the aim of exploring how we can combine our different kinds of expertise in an effort to understand how humans have coped so successfully throughout history.  Genetics plays an important part in our investigations.

As often emphasized in this column, from a DNA perspective we are all migrants.  Moreover, we all carry the traces of our migratory ancestors within our genes. Still we all have our own unique genetic fingerprint. This last phenomenon is particularly fascinating when you realize that starting with the emergence of the first humans until the present day, 107 billion people have lived on earth. And yet, from a genetic perspective, we are all unique.

Equally astounding is that if one were to write down all the letters representing the three billion DNA bases that are incorporated into each individual they would fill at least 21 thick telephone directories. Considering that our 20,000 genes are hidden among these three billion letters it is hardly surprising that the Human Genome Project needed ten years to map this extremely complex code.

To be able to identify the village of your ancestors, is, at this stage of development, a complete fantasy.

Ever since this mammoth task was finished in 2001 developments have accelerated considerably. Today the genome of more than 250,000 people is fully known. Further studies, such as the HapMap Project, have succeeded in mapping the genetic differences between different groups, which has often led to unexpected perspectives.”

Would you like to know more? Then I recommend the book – A Brief History of Everyone Who Ever Lived by Adam Rutherford. It is filled with fascinating examples and stories. It is an excellent read – certainly if you are planning to get your DNA tested.

Commercial firms producing DNA test kits like to make very specific claims, suggesting, for example, that you will be able to identify the village of your ancestors. However, at this stage of development this is a complete fantasy.  Moreover, they do not map your entire DNA; only a few specific markers are examined.

Nevertheless, the results they produce are often worthwhile because they do give one an idea of how varied our DNA really is. Would you like a taste of what to expect if you get your DNA tested? Then browse the internet for the term – A Genetic Atlas of Human Admixture History.

This article was first published in Het Financieele Dagblad (14-10-2017, in Dutch). More on leonardrutgers.nl.