Rethinking Human Relationships with the Sea

How are our oceans protected, particularly in times of climate breakdown? That is the question that members of the theme group "Climate change and the governance of tropical marine conservation", currently at NIAS, are trying to find an answer to.

Oceans and other marine ecosystems play an extraordinarily important role in the current climate crisis. They absorb and redistribute carbon dioxide and heat, and are sites of astonishing biodiversity. They are crucial for our planet’s health.

Thus far, the sea is protected most prominently by means of Marine Protected Areas, geographically distinct zones created by governments and civil society organizations. Surprisingly, there is little attention for research on how these areas function, whether they work, and how climate change affects them.

The theme group, a cooperation between KITLV, NIOO, Wageningen University and Research and NIAS, tries to fill that gap. It brings together scholars from different disciplines – ecology, human geography, political science – to collaboratively research ocean governance. Eric Mijts and Sonny Mumbunan elaborate on their first findings.

What Lies Beneath the Surface

The UN Biodiversity Conference has ended last month. One of the topics discussed by the international community is the ‘30by30 goal’, which aims for 30% of the oceans protected by 2030. A massive increase. How is humanity doing on that?

Eric Mijts: “Well, there is a hopeful perspective. There is a growing collective awareness of the importance of marine protection. At the same time, we are critical about the practices of marine protection – there are many lawless situations with no assigned responsibility, where people and governments look away. Many of the management concepts of marine protected areas focus on putting the human in, instead of protecting the sea from human activities. There is a totally anthropocentric focus on human activity instead of on protecting nature.”

Sonny Mumbunan: “If we look at the formulations in treaties and policy documents on marine protection, for example by the International Union for Conservation of Nature (IUCN), we see a very terrestrial bias on how the ocean is viewed, focusing mostly on its surface. There’s little concern about what lies beneath the surface, about the less tangible and less visible elements of the ocean. The ways that Marine Protected Areas are set up as a legal body, may make things worse. It focuses very much on resource exploitation.”

Eric Mijts: “MPA’s can be extremely useful, but only MPA’s cannot save the ocean. The ocean is not only a surface, but also has a volume, depth and global currents. Nobody takes responsibility for the open ocean. The lack of response to such practices is flabbergasting to me.” 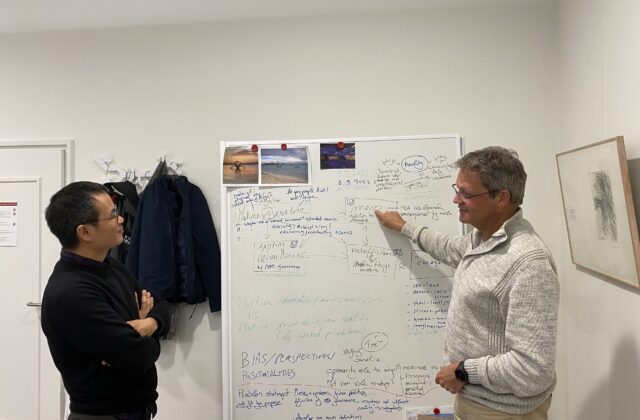 Sonny Mumbunan (left) and Eric Mijts at the NIAS office.

What would be needed then to better protect the ocean?

Eric Mijts: “Developing an aquatic, oceanic worldview. Not of surfaces, but of depths and connections. The social sciences can contribute to that change of perspective. We witness, also in our own theme group project, that coming from the natural sciences, it is much easier to define boundaries, borders, clear cut demarcations, definitions and maximum amounts. The social sciences are more used to messiness, contestation, and importantly, an openness to alternative realities and the inclusion of local knowledge.”

Sonny Mumbunan: “When studying specific MPA’s in Indonesia we find that the definitions of the IUCN, with its language derived from the natural sciences, do not fit. There are many forces, actors and levels to engage with. People from surrounding villages have very different imaginations. Even ministries of marine and fishery and of environment and forestry have different imaginations about marine protected areas. We need to capture social complexity into ocean protection governance.

I recall an informal exchange with a former minister for development planning as we spoke about emissions and low carbon pathways. But amidst the conversation he said ‘Forget the numbers and let’s just watch a video by Greta Thunberg. My granddaughter just showed it to me.’ Even at that level there is a recognition that at some point, facing climate change, metrics will become less important in policies and we may need to bring in feelings, emotions and understanding of human behaviour in policy discussions.”

KITLV, NIOO, NIAS and WUR join forces in an interdisciplinary study of the impact of climate change on social-ecological systems (SES). A consortium including Indonesian and Caribbean partners in academia and NGOs will co-create and implement pilot research in four coastal zones in these two tropical archipelagoes. The theme group is supported by a grant from the Royal Academy of Arts and Sciences. Members of the theme group include: 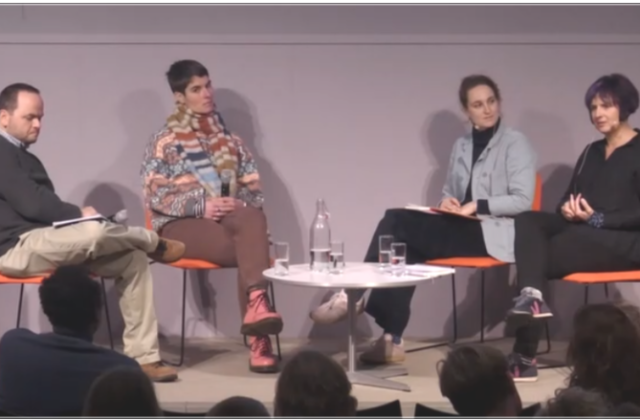 Yvonne Kunz (right), Eric Mijts and colleagues discussed secrets of the seas in a public talk on 13 December 2022.

Watch the full talk “Secrets of the Seas in Times of Climate Breakdown”.