My principle research question asks the extent to which post-conflict indemnity and compensation, as well as landscape restoration, reconciled former combatants to the post-revolution Irish Free State. It also considers gender bias and compensation restrictions as inherent hindrances to reconciliation.

This project examines the effectiveness of various personal compensation and property reconstruction schemes introduced after the Irish Revolution (1916-23) to determine the effectiveness of compensation and environmental reconstruction as tools of conflict resolution. It uses methodologies of conflict transformation and environmental history to develop a more sophisticated understanding of the nature and impact of political violence and reconciliation during and after the Irish Revolution. In doing so it will reassess the motivation behind post-revolution compensation schemes, evaluate their success in transforming a post-conflict society by offering pensions to ex-combatants and encouraging British loyalists to rebuild their estates and remain in the new Irish state, and examine the role of the environment as an actor in war and conflict transformation.

“The Political Ecology of Nationalist Literature, 1880-1922,” in The Cambridge History of Irish Literature and the Environment, ed. Malcolm Sen, (Cambridge: Cambridge University Press, 2022).

“Violence, Trauma, and Memory in Ireland: The Psychological Impact of War and Revolution on a Liminal Society, 1916-1923,” in Aftershock: Psychological Trauma and the Legacies of the First World War, ed. Jason Crouthamel and Peter Leese (Switzerland: Springer Nature, Palgrave Macmillan, 2017), 117-40.

“The Destruction of Dublin,” in Century Ireland (January 2016): http://www.rte.ie/centuryireland

Hello! Begroeting! My name is Justin!

I am an Associate Professor of Modern European History at Idaho State University. My research examines the greater First World War period, with particular focus on Ireland, environmental destruction, and conflict. I grew up outside Detroit, MI, USA and was educated at Central Michigan University (B.Sc., 2003), University College Dublin (M.A., 2005), and Trinity College Dublin (Ph.D., 2011).

I enjoy traveling and am looking forward to exploring Amsterdam and the Netherlands as an NIAS Fellow. In my spare time I paint watercolours, read books on psychology and philosophy, and collect vinyl. I love a good flea market and will always stop into a bookstore. 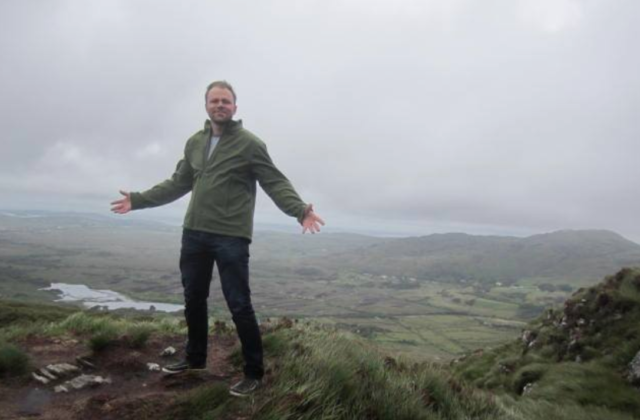